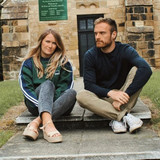 Sibling duo Helen and Joe Hammill have been earning a growing reputation for their magical live shows after sharing stages with the likes of Tom Odell, Brian Wilson, Stereophonics, The Head and the Heart, Lewis Capaldi, Jake Isaac and Nerina Pallot. Sold-out signs are commonplace at their own headline gigs, including huge statement dates in their native North East at Sage Gateshead and Middlesbrough Town Hall, where a crowd of over 1,200 saw them perform alongside the Northern Orchestra. Helen and Joe have also appeared at acclaimed international tastemaker events Canadian Music Week and Reeperbahn Festival, as well as at some of the UK’s finest boutique and inner-city showcases like Cambridge Folk Festival, Black Deer, Tramlines, Live At Leeds, Liverpool Sound City and Deer Shed. With blogs such as Clash, Louder Than War, Wolf In A Suit and Gigsoup singing their praises, not to mention Music Week, the Independent, Metro and Record of the Day, Cattle & Cane are on the tip of respected tastemakers tongues. They’ve received airplay from such luminaries as Dermot O’Leary on BBC Radio 2, Elton John on Beats 1, Tom Robinson on BBC 6 Music, Frank Skinner on Absolute Radio, Gary Crowley on BBC London and John Kennedy on Radio X, as well as the BBC Introducing who invited the band to play on their stage at Radio 2 Live In Hyde Park. Over on TV, their music has featured on shows including Sunday Brunch, Made In Chelsea, The Only Way Is Essex, Avenida Brasil and MTV’s Catfish.