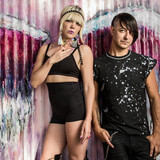 Aydra and Emvy, Alien meets Outlaw. The duo formed on the trendy Eastside of Los Angeles in 2016. After spending a year together in LA playing the hero to their former projects and pushed to the outskirts of Eagle Rock as the city quickly replaced charming Spanish homes with condos, they set their sites on the high desert. Finding no limits amidst the ineffable Joshua Trees and volatile yet forbearing no-mans landscape, they created a new vision and Bellstarr was born. She was one of the most famous outlaws to live, Aydra's distance Uncle even poses with her in pics on Google. Though the synth, dream-pop, EDM-rock sound wasn't exactly the norm of the JT saloon or famed Pappy and Harriettes, the community embraced them, notably Desert Queen, Jesika Von Rabbit. Course set on their mission, within a year the duo had material for their debut album Crash and had performed dozens of shows a handful of them at the Bigtop where Aydra sang in aerial apparatus, soaring above the mesmerized crowd, P!nk style. They campaigned to tour and create a moving vlog while releasing new singles along the way. In late 2018 Maya began to take shape.

They welcomed their 13 track self-produced album into the world June of 2019. Proud of the soaring sounds achieved on an artist budget, loaded with faith as their artillery, the album was set free to fly. Aydra now retrains the project solo and has her sight set on her next record, ANTIDOTE.