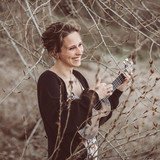 My Sun and Stars

Featuring My Sun and Stars

If everyone tells you to stop doing what you love the most, what would you do? Many people sure would give up, but “My Sun and Stars“ lead singer Emma Patterson did the most unexpected thing: she took all the criticism and negative vibes and turned them into happy songs. “Through all my life I was told me that my songwriting wasn’t good enough, my voice not outstanding enough and that I should stop making music immediately.“ But instead of quitting, Emma continued to believe in her music. Emma started writing songs when she was 14, using her ukulele as harmony instrument while singing her own melodies to friends and music teachers. Already at this point she was told, that

her talent wasn’t big enough to make it in the music industry. But she kept on believing in her dream and pursued her goal to become a professional songwriter. But her songs were rejected by labels, publishers and agencies, telling her that her voice wasn’t unique and her songwriting not outstanding enough. One evening, after having received another rejection from a label, she picked up her ukulele and started to write an uplifting song. “I wanted to write the happiest song there is to cheer myself up and it worked.“ She continued to write happy, ukulele-driven songs and described them as “My Sun and Stars“. Consequently, her songs were used in ad campaigns on international television and Emma had finally made her dream come true. At the end, nothing can stop a girl with an ukulele.