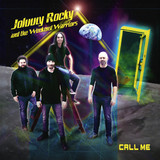 Johnny Rocky and the Weekend Warriors

Johnny Rocky is a singer, bassist and songwriter based in the city of Aachen, Germany. Since he loves loves punk rock and heavy metal, he decided to form a band that plays fast punk rock with a touch of heavy metal. In 2017 he wrote a few songs and started to recruit other musicians, who ultimately became his Weekend Warriors. In early 2018 he had found a solid line-up featuring Matt McHazeman (guitar), Bobby Paceman (guitar), Betty Boom (drums) and, of course, Johnny Rocky (vocals, bass). The first CD, which was released in 2019, includes ten songs with a total running time of roughly twenty minutes. The short running time is not a coincidence. Johnny’s songwriting philosophy is that “good songs are short songs”. He adores the early albums of the Ramones, which include a lot of great songs that are shorter than two minutes. If you think that the songs are too short, you can press the “repeat” button on your player. That will make the songs longer.Since 2019, two additional weekend warriors have joined the team: Chriss Rey (guitar, bass) and Jamie Powers (guitar). When Johnny Rocky and the Weekend Warriors play live, they play like a football team. This means that the composition of the line-up and the positions of the players may change. Sometimes they play with two guitars, sometimes with three, and sometimes with one. When Betty is unavailable, Bobby switches from guitar to drums. This approach has a big advantage: Every JR concert is different and it never gets boring!