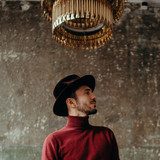 YUJOY aka Yury Avi is a music performer and producer from Russia who reveals his creative potential in the genres of electronic, world, reggae, nu soul, indie folk, alternative rock, ecstatic music. Yujoy is actively touring the world and collaborating with talented artists across the globe. Yujoy's first album, "River Of Life", was recorded in Sweden with a music producer Markus Berg, known for his projects Kultiration, Markandeya and Minuk. Yujoy is a sunny and bright musician who brings positive and powerful charge of light energy to the people through his music. Traveling around the world he finds inspiration in different cultures and people, what strongly effects his uplifting and soulful music. Yujoy was living in Melbourne, Australia for several years and was actively involved in the city's vibrant and rich music scene. Inspired by the variety genres and quality of local sound he began to write his own music, that's where Yujoy project has began. The Melbourne sound is fundamentally imprinted on Yujoy's music and style until today. The main "message" of Yujoy's songs is to follow your heart and not be afraid of who

you are, to follow your dreams and be open to the mysteries of life, creativity, love and freedom.