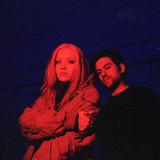 Formed in Blaine, Minnesota in the mid-2000s and based in Minneapolis, indie rock band Now, Now pair acoustic guitar, synths, and fuzzy, '90s alt rock-inspired sounds with fiery Midwestern emo-pop. The group's early material was ruminative, anxious, and dusky, with 2018's Saved crystallizing their sound into something more emotionally tangible and sonically succinct. Meeting as members of their high school marching band, Cacie Dalager (vocals, guitar, keys) and Bradley Hale (drums) soon started writing songs together and enlisted help from a rotating group of friends and family as they got the band off the ground and started booking shows. Originally going by Now, Now Every Children, the duo of Dalager and Hale wrote and recorded the full-length Cars, released in 2008 by Afternoon Records. Guitarist Jess Abbott joined that core duo in 2009, and they made their Now, Now debut in 2010 with the Neighbors EP via No Sleep Records. The title track was licensed for an episode of the ABC drama Grey's Anatomy in 2011. The trio followed it up later in 2011 with the Dead Oaks EP, and the long-player Threads arrived via Trans Records in 2012. It marked their Billboard debut, appearing on the Heatseekers Albums chart. In the meantime, Abbott had self-released a solo album called Capes in 2011, which No Sleep Records gave a label release in 2014. Its follow-up, Tancred, came out in 2013 on Topshelf Recordings. Hale made his solo debut with his electro-pop project Sombear, issuing 2013's Love You in the Dark on Trans. Abbott then adopted the name Tancred as her performance alias, signed with Polyvinyl, and released her debut as Tancred, Out of the Garden, in 2016. With Abbott focusing on a solo career, Dalager and Hale reunited as a duo for the first Now, Now material in five years. A string of singles arrived beginning in May 2017, including "SGL," "Yours," and "AZ," ahead of the release of the group's third album and first in six years, Saved, which saw the band adopting a less insular, and more hook-driven sensibility. ~ Marcy Donelson, Rovi