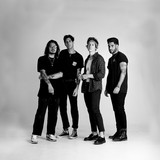 text us: +1 (732) 696-7701 hey, we’re young rising sons and we’re from red bank, new jersey. since 2010, when we decided to start a band in steve’s parents' basement, highs and lows have been our mantra (somewhat literally). we’ve been played on the radio, signed a major record deal, then dropped from said major label, toured the us, canada, and the uk where we played some cool festivals, a lot of sold-out shows, and also some shows to a crowd of 5 people including the bar staff (perhaps this is why you’re not supposed to write your own bio, but unapologetic honesty is kind of our thing). our band is about embracing the journey, valuing the perspective we get from the lows, while soaking in the highs.

the growing pains, the ebb & flow, and the unpredictability of life is what defines us as humans, and we’ve been able to experience all of it together as best friends.