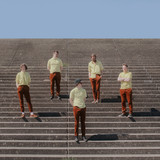 The release of 5K HD's debut album And To In A in 2017 catapulted the band almost immediately to supergroup status. Each of the members was already well known in his or her own right; united on stage they proved to be a force of nature, celebrated at pop festivals as an atmospheric experience and at jazz festivals as virtuosic innovators. Their freedom and risk-taking as a band are practically unparalleled, as is their ability to stay perfectly balanced on diverse, constantly shifting musical terrain. 5K HD sounds futuristic, fragile, epic, brutal, playful, threatening, cinematic, distorted, light and easy, dope, badass, sensitive. 5K HD is Mira Lu Kovacs, Manu Mayr, Martin Eberle, Benny Omerzell and Andreas Lettner. The band won several awards, including the Amadeus Austrian Music Award and the european music prize MMETA (both in 2020). Following their joint debut And to in A (2017) and sophomore High Performer (2019), their single "Happy Fxxxing Life" (2020) became an unexpected hit, topping renowned Radio FM4s Year-End Charts of 2020.