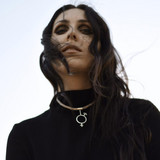 There is a core element to Chelsea Wolfe’s music—a kind of urgent spin on America’s desolation blues—that’s existed throughout the entirety of her career. It manifested in the lo-fi bedroom recording experiments of her debut album The Grime and the Glow (2010), the electrified dirges of Apokalypsis (2011) & Hiss Spun (2017), the electronic embellishments and distorted growl of albums like Pain is Beauty (2013) & Abyss (2015), and the sparse arrangements of Unknown Rooms (2012). At the center, there has always been Wolfe’s woeful longing and beguiling gravity, though the framework for compositions has continuously evolved. Her austere beginnings were gradually bolstered by the electronics and production of her collaborator Ben Chisholm, and filled out with full-band arrangements. The music became increasingly dense and more centered around live performances. And while these lush recordings have in many ways magnified her power, the elaborate renditions create a dichotomy given the private and isolated nature of her art. Her latest album, Birth of Violence, is a return to the reclusive nature of her earlier recordings, written and recorded in the solitude of her remote home in Northern California. - Brian Cook