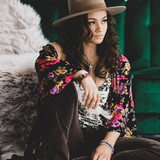 Born in South Carolina but raised in rural Western New York, Ddendyl began her musical career as a child studying classical violin, opera and teaching herself the piano. She grew up listening to Gospel and Country, being inspired by artists such as Johnny Cash and Reba McEntire. Ddendyl’s compelling voice and emotional storytelling, make for an authentic musical mix of country, blues, and rock and roll.   Ddendyl has shared the stage with artists such as Scotty McCreery, Sebastian Mikael, Elle Varner, and opened along side colleagues for Justin Moore following her appearances on Season 6 of NBC’s “The Voice” In addition, Batavia Daily News named Ddendyl the “2014 Artist of the Year” for Western New York. Ddendyl was also named the Nash Next 2017 New York Winner.