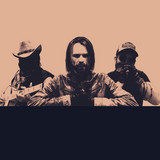 The first seeds for what would become Bound by Law was planted when Rick Ruben produced Johnny Cash's American Recordings. It stripped country music to its bones to reveal a raw and rugged side of the genre that, to this day, is a big inspiration for Bound by Law. But rather than simply making a wannabe version of this great American music tradition, Bound by Law fuses it with their own Danish roots to make their own unique style of country music.

Currently Bound by Law is releasing songs from their Traveling Band Sessions - a mini documentary series where the band travels Denmark to visit interesting places to record a new version of one of their songs inspired by the place. The episodes are being released on YouTube and the songs from each episode is released on Spotify. The first episode follows the band to Denmark's oldest general store that is still active where the band records a version of their song Mud and Clay adding new elements to the song inspired by the late great Ennio Morricone. In the newly released episode 2, Bound by Law finds themselves underground in an old WWII bomb shelter where they record a new version of their popular song Cowdray's Old Mexican Eagle that tells the story of a guy working for Big Oil who travels to the Middle East to buy conflict oil from ISIS.