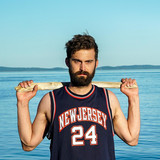 Dams of the West

Featuring Dams of the West

A witty and intelligent indie rock group that emphasizes percussion and melody in equal portions, Dams of the West is a side project of Chris Tomson, best known as the drummer with Vampire Weekend. Tomson was the last member of Vampire Weekend to strike out on his own, and Dams of the West came about as he found himself with downtime from the band, while also pondering the challenges of marriage, fatherhood, and adulthood in general as he entered his thirties. Tomson began writing songs, and in 2016 he decided to make a solo record. After Tomson's friend and Vampire Weekend bassist Chris Baio heard his demos, he suggested that Patrick Carney of the Black Keys would be a good choice to produce the album. Tomson approached Carney, and he quickly signed on to help make the LP. Brian Burton, aka Danger Mouse, also became involved in the project, and suggested to Tomson that it would be a better idea if he used a band name for the project rather than releasing it as a solo album. Tomson agreed, and he chose bring it out under the banner Dams of the West. The album, Youngish American, was released in February 2017 on Danger Mouse's 30th Century Records label. In support of the album, Tomson assembled a touring version of Dams of the West who hit the road for a series of live shows, including a tour opening for Black Joe Lewis. ~ Mark Deming, Rovi