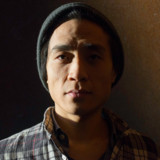 Imagine a universe where we are connected by shimmering beams of light, everyone to everyone. One quirk about this universe is that the beams send emotions between us, one million per minute per pair, clearly and effortlessly. Joy is instantly contagious. A hurtful thought toward another is understood with compassion, seen alongside the place of sadness where it arose. Every feeling triggers infinite empathy, therefore boundless acceptance. (The beams send only the stuff of our souls, not our thoughts — so we still have privacy, interesting conversation, and the ability to prank each other silly.)   Now imagine we already live in this universe except, long ago, we somehow forgot where the beams went. But we’ve always kept music with us, because it’s our best way to speak in the old way.  - Taiwan-born & reared on-the-go between Taipei and the American Southwest, Eric Pan found his musical footing via a jazz mentorship with Ray Brown at the University of California. These studies propelled him onto stages with Jeff Hamilton and Roy Hargrove, plus over a decade’s tenure as New York City pianist & composer. Pan's compositions and improvisations reveal a relentless pursuit of simplicity, craft, and universality.   2020 saw his 3-album TRAVEL POEMS debut; this summer brings his first neoclassical EP titled LULLABIES OF THE PLEIADES. Hear him interviewed on-air next to Orson Welles on national radio with PRI’s “The World”, and read his premiere interview in JAZZIZ Magazine.