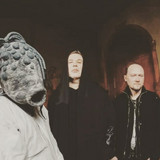 KORYPHEUS is a metal unit from Kyiv, Ukraine, formed in 2016. December 2018 saw Korypheus unleash their debut album «Blessed. Their critically acclaimed sophomore effort «Over the Rainbow» was released on the 20th of November 2020 via French metal label M&O Music. The album won them praise from critics and funs alike. Korypheus combines multiple heavy metal subgenres with a keen ear for melody and epic song structures. The band has mentioned many of their influences for their music, including Gojira, Black Sabbath and Mastodon. Korypheus have performed regularly, bringing their compositions to the live stage as well as being loved for their live covers of Black Sabbath. The album “Over the Rainbow” won praise from critics: • “I’m going to make a very bold statement and say that KORYPHEUS have made one of, if not, the best Prog Metal albums of 2020”.

(Metal Temple, UK) • “Over the Rainbow is a revelation, being a wonderfully fresh mixture of metal, core and prog - sort. The extraordinarily gifted five-piece. Like fellow countrymen (and woman) Jinjer, Korypheus have that same intensive uniqueness and persona, and with some luck Over the Rainbow can catapult the band to the same level of notoriety”. (Powerplay, UK)