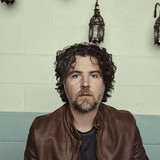 After more than a decade in the Austin music scene as the lead singer of rock outfit Nelo, Reid Umstattd is set to release his first collection of songs as a solo writer and performer.

"Pockets of Clouds", his debut EP, is an eclectic mix of introspective singer/songwriter, soul, and Southern-tinged rock tracks that run the gamut of Umstattd's influences and prove his ability to genre jump.