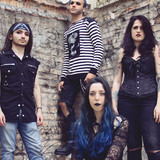 The group was formed in the summer of 2018 in ITALY, before coming out on stage for the first time on September 1, 2019 at the Ravenna unit party and join the stage as headliner at Prunk fest with Aldi dallo spazio by Jolly rogers records In less than a year of work, rich in experience and sharing, in 4 members they were so well balanced between them that it was decided to assist all the pieces in a single EP (currently in production independently) mastering in Officina della musica, in Ravenna. It all came together thanks to the influences of the 2000s that united all of the 4, that sense of nostalgic that he used to try and then re-deposit his ears on Youtube only a few months later. Thus was born the genus PRUNK that merges all the people of those who feel "moved", fallen without a reason, misplaceds, alienated and without a true place and group of belonging: Me Strayed A fussy mix of starset, cure, muse, linkin park and Paramore!