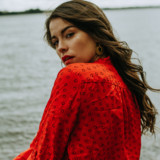 Singer-songwriter, first generation Quebec-Mexican, actor, activist and dancer, Noé Lira loves to explore the crossbreeding of forms, languages and cultures. Trilingual, her poetry is socially engaged, denouncing violence against women, nourishing solidarity and empowerment. After many exploratory residencies (Berlin, Medellin, Valencia) and a first series of concerts in Spain in March 2019, in a work in progress perspective, she settles in Montreal to begin the creation of what will become her first EP, Latiendo la tierra. For this first opus, the artist made the conscious choice to surround herself with a team of women. With Rachel Therrien as producer, she created the sound universe alongside 11 musicians. A colorful and powerful organic musical journey, imbued with Latin rhythms, textured with nature sounds. A celebration of femininity and nature. A first single is to be released on June 4th, and the EP will be released on August 27th.