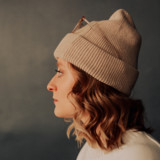 Sofi Gev is the solo project of American singer-songwriter and indie pop artist Hannah Lovelady. Influenced by such artists as Birdy, AURORA, Maggie Rogers, Cœur De Pirate, Regina Spektor, Shara Nova of My Brightest Diamond, and Natasha Khan of Bat For Lashes, her music layers introspective, offbeat lyrics and delicate vocals over a dreamy blend of indie pop, electronica, and indie folk. Her earliest and most enduring musical influence came from her father singing Joni Mitchell songs to her at night as a child.  Sofi Gev’s songwriting began in her childhood, entertaining herself on family road trips by making up silly songs with her younger sister. After piano lessons, she started playing the French horn in middle school band class and continued through high school. She honed her sense of melody by singing the words of recipes from cookbooks accompanied by her father playing acoustic guitar.  If you listen closely, you will hear revealed in an intimate yet universal way a woman bravely, fearfully, but honestly embracing and confronting life.