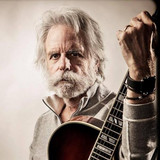 A founding member of the Grateful Dead, Bob Weir's musical legacy (separate from its cultural implications) will be of an utterly strange rhythm guitar player and songwriter who grew up in one of the most lasting outside bands of the 1960s. Playing with the Dead until their dissolution following the death of Jerry Garcia in 1995, Weir has since made his musical homes in RatDog and the Other Ones. Born in 1947 and adopted by a rich California engineer, Weir's intense, undiagnosed dyslexia gave him trouble at school. He was labeled a troublemaker and shipped off to boarding school, where he met future songwriting partner John Perry Barlow. After being kicked out of the school, Weir returned to the Bay Area, where he bummed around the burgeoning folk scene and came into contact with musicians like Jerry Garcia, New Riders of the Purple Sage founder David Nelson, and Jefferson Airplane guitarist Jorma Kaukonen. A series of jug bands eventually morphed into the electrified Warlocks who, in turn, became the Grateful Dead following a series of gigs at Ken Kesey's Acid Tests. Weir developed his odd rhythm style playing between the sweet, articulated lead guitar of Jerry Garcia and the avant-garde basslines of Phil Lesh, who joined the Dead as a newcomer to his instrument after studying trumpet and serial music with composer Luciano Berio at Mills College in the early '60s. The Dead's sound, a psychedelic hybrid of genres, was developed through endless improvisation. Weir's role as a rhythm player was to give force and color to the developing music. Like a jazz guitarist, Weir was often not evident in the mix, but still a profound shape on the sound. Weir's earliest songwriting efforts mirrored those of Garcia and Lesh, though less successfully. By the early '70s, he had crossed paths with Barlow again and the two began their creative relationship in earnest. Soon, Weir was producing songs in his own distinct style -- a blend of Americana and the odd voicings he specialized in. As the health of Dead frontman Ron "Pigpen" McKernan waned, Weir found his rich baritone increasingly at the center of attention and developed a stage personality to match it. His first solo album, Ace, released in 1972, featured Weir backed by the rest of the Dead. Through the late '70s, and especially during the Dead's year off in 1975, Weir toured and recorded with a number of groups, including Kingfish and Bobby & the Midnites. Kingfish was by far the most successful of these efforts. Listened to in retrospect, Bobby & the Midnites sound grounded in the period. More importantly, though, Weir's guitar style was developed in specific response to the situation of the Grateful Dead and worked less successfully without his counterparts in Garcia and Lesh. The Dead remained Weir's primary gig through the 1980s and the first half of the 1990s, touring incessantly and finally scoring success with their 1987 album, In the Dark. As Garcia's dependence on drugs increased, Weir found himself increasingly in the position of de facto bandleader. When Garcia died in 1995, Weir had recently formed the RatDog Revue (soon shortened to RatDog) with bassist Rob Wasserman (with whom he had been playing duo shows since the late '80s) and former Primus drummer Jay Lane. Through a revolving lineup, the band -- like the Dead -- toured incessantly, working their way through clubs and theaters, building both a repertoire of new Weir compositions and reworked Dead songs as well as an original sound. In 2000, RatDog released their first album, Evening Moods, to mixed reviews. In the summers of 1998 and 2000, Weir reunited with several former Dead bandmates to tour as the Other Ones, releasing a live album in 1999. Throughout the early years of the 21st century, Weir continued to develop as a bandleader and functioned as an elder statesman for new generations of jam bands. The Other Ones eventually gave way to the Dead, which also featured Phil Lesh, Mickey Hart, and Bill Kreutzmann. Once that group faded away, Weir and Lesh played as Furthur before the guitarist resurrected RatDog in 2013. In 2014, wheels started turning for a 50th anniversary celebration for the Grateful Dead. First came The Other One: The Long Strange Trip of Bob Weir, a documentary that debuted at the Tribeca Film Festival in 2014. Then, in the summer of 2015, the Dead reunited for farewell concerts in San Francisco and Chicago. Weir, Hart, and Kreutzmann subsequently toured with guitarist John Mayer as Dead & Company, a tour that went into 2016. In the autumn of that year, Weir released Blue Mountain, his first solo album in 40 years. Largely co-written with singer/songwriter Josh Ritter and co-produced by Josh Kaufman, who has played with the National and helmed albums by Ritter and Craig Finn, Blue Mountain was a low-key, atmospheric update of Weir's signature cowboy songs. ~ Jesse Jarnow, Rovi