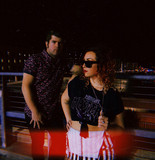 Glass Mansions, led by the charismatic, sultry voice of Jayna Doyle, is an Altpop duo from South Carolina, influenced by modern and 90s pop, heavy synths and tight, dance-friendly rhythms. Their music is propulsive and elastic, with bubbly pop-melodies, lush electronic beds of sound and intelligent, intimate lyrics. Live, it’s pure Rock n’ Roll – raw, sweaty, passionate and covered in a cloud of fog and confetti – and chances are you’ve probably seen Glass Mansions at some point or another as they’ve crisscrossed the country, playing places like SXSW, Warped Tour, Daytrotter, South Sounds and Florida Music Festival.

In the case that you haven’t, you are in for a treat. Go See Live Music says “Glass Mansions are a pop lover’s dream,” and that the music “follows pop anthem sensibility, and does so magnificently. You feel like you know the song when it is over and are reaching for the repeat button.” That knack for writing earworms recently landed the band featured spots on Bravo, Netflix and MTV, among other sync placements. Their sophomore EP, “RITUAL” was helmed by multi-platinum producers Zack Odom and Kenneth Mount and finds the duo of Doyle and multi-instrumentalist Blake Arambula exploring self-discovery, demons, nostalgia, and the satisfaction and laser focus that comes with leaving toxicity in the past.