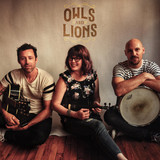 New Jersey's Owls & Lions Debut EP (produced and engineered by Hanan Rubinstein - Guitarist for Alicia Keys) is due in early 2019. The first single from the sessions, “Perpetual Bliss," was released at the end of 2018, with the follow-up single, "I Do, Me Too" released in January 2019.

Owls & Lions began their story as a singing guitar/violin duo that performed almost exclusively at weddings and private events. They later expanded to a trio when they added a drummer/percussionist and began incorporating their own original music into their private event gigs. Gaining a loyal following in the New Jersey/New York event scene over the years, they smoothly transitioned into the welcome arms of their fans in 2018 at their first shows open to the public.