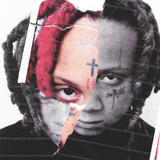 Trippie Redd emerged in 2015 with a series of online tracks that hinted at the versatile style he came to develop, one that blended elements of cloud rap, emo rap, and trap influenced by T-Pain, Gucci Mane, and Lil Wayne with the energy of punk and metal inspired by Slipknot and Marilyn Manson. Trippie's fluid approach to genre and creative expression caught on with mainstream audiences, with both his 2019 mixtape A Love Letter to You 4 and 2020 studio album Pegasus debuting at the upper reaches of the Billboard charts. Born Michael Lamar White IV in 1999 and raised in Canton, Ohio, Trippie Redd was still a teenager when his rap career started. His brother, an aspiring rapper, had died in a car accident when Trippie was just ten, and this tragedy motivated him to live out his departed brother's dreams. He began releasing mixtapes and videos that would eventually lead him to viral Internet success and a deal with the Universal-distributed label Strainge Entertainment, though he would later sign on with independent label 10K Projects. After working on mixtapes like 2016's Beast Mode and Awakening My InnerBeast, Trippie Redd delivered his most involved work with 2017's A Love Letter to You, which reached the Top 100 of the Billboard 200. A Love Letter to You 2 followed the same year and debuted in the Top 40 of the Billboard 200 albums chart. That same month, Trippie joined with Lil Wop for the EP Angels & Demons. Before the end of the year, he scored his first Hot 100 entry with the Travis Scott-assisted single "Dark Knight Dummo." In 2018, Trippie Redd issued several singles in anticipation of his debut studio album, Life's a Trip. The LP placed the artist's voice at the center of many songs, highlighting his unique vocal style as both a rapper and singer, and became the first in a series of Top Ten Billboard 200 hits. Just a few months later, he returned with the mixtape A Love Letter to You 3, another chapter of depressive and angsty lyrics on both sung and rapped tracks. By now, Trippie had relocated from Ohio, briefly living in Atlanta before landing in Los Angeles. His second studio album, !, arrived in 2019 and immediately topped the Billboard 200. Its title was inspired by the album ? by the late rapper XXXTentacion and continued Trippie's emo rap musings. The commercial mixtape A Love Letter to You 4 arrived in late 2019, debuting at the top spot on the Billboard charts and racking up over 100 million streams in its first week. An expanded edition of the mixtape was released the next year, with bonus material and new songs that featured artists such as Lil Tecca and Chance the Rapper. This revised version of the wildly successful mixtape set the scene for third studio album Pegasus, which was released in October 2020. The record included cameos from Young Thug, Future, Busta Rhymes, and others and debuted at number two on the Billboard charts. ~ Fred Thomas & Neil Z. Yeung, Rovi