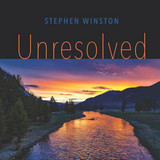 Winston gets back to his roots, collaborating with Michael Pfeifer, who also co-produced, engineered, mixed and mastered The Overlook Sessions and its follow-up Gradient Nights (2011). Winston, ever the insightful and emotional musical storyteller, found life affirming ways to chronicle some of the traumatic personal and family challenges he has faced in song. Winston artfully balances the heavier themes on Unresolved with spirited observational tunes that tap into his pop-country leanings.