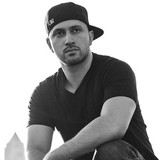 Tony K is one of the latest to emerge out of the Detroit music scene. With a musical background, Tony K is not only an independent Hip-Hop artist, but also a producer and songwriter, having collaborated with artists and labels such as Royce Da 5'9”, Kurupt, Aftermath, and many others. Tony K has been gaining traction since releasing several projects that have received support from Hip Hop DX, Highsnobiety, Noisey, and others. His most recent single, "Flip the Script" was released on August 10, 2021.