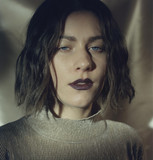 Farao established a trippy, textured mix of folk, rock, and whimsical atmosphere alongside ethereal vocals on her 2015 debut, Til It's All Forgotten. Three years later, her follow-up takes a left turn, though it's a wide rather than a sharp one, retaining much of her off-kilter electro-acoustic sound but recontextualizing it as dedicated alternative dance music. Titled "Pure-O", the album was specifically inspired by Soviet disco and an obsession with the era's analog synths. (The record's gatefold packaging includes an itemized photo of a dozen or so models of synthesizers and controllers). She locks into the discothèque vibe right from the opener, "Marry Me," a swirly, romantic club track with lyrics like "hold me, kiss me, marry me" accompanied by gossamer sighs and sparkling mechanical timbres. Also featured prominently on Pure-O are both live and programmed drums and zither, an instrument that accompanies her on tour and opens the second track "Lula Love You," with a glissando. Later, the woozy "Luster of the Eyes" incorporates bent pitches and a contemporary alt-R&B persona, while "The Ghost Ship" manipulates and distorts vocal samples within strata of plucked stringed instruments, cymbals, and shimmery synths. Taken together, the set provides both reliably dreamy background grooves and, for the more attentive listener, frequent moments of discovery, making it seem more cutting edge than throwback despite its main inspirations.