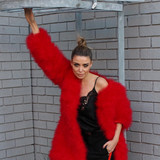 Dubbed the 'Queen of the Clubs' for her record-breaking 14 No.1 dance singles in the UK - more consecutive No.1s than any other female artist in the world - Dannii's reign began in 1997 with the Xenomania chart-topper All I Wanna Do and continued with the international hit Who Do You Love Now? In 2001.   Dannii’s music has earned her more than 200 weeks on the official UK sales chart, selling more than 7-million records worldwide. In 2013, Warner Music Australia released This is It: The Very Best Of, a collection of singles spanning the past 23 years.   In 2015 Dannii and her sister Kylie Minogue sung their Christmas disco hit ‘100 Degrees’ from the Kylie Christmas album, on X Factor Australia and at the Royal Albert Hall. The 100 Degrees video clip took the No.1 spot world-wide on the iTunes music video chart and reached the No.1 spot on the UK Official Vinyl singles chart for 2016.   2015 marked Dannii’s long-awaited and much anticipated return to music with celebratory Mardi Gras anthem 'Summer of Love' which reached No.1 on the UK Club Charts and was remixed by As I Am, Seamus Haji and Rich B & Phil Marriot.   Dannii and her band toured as special guest on Culture Club and Take That's Australian tours, and in 2017 she released new tracks ‘Holding On,’ and ‘Galaxy’ (written by Sia).   London Records celebrated the 15th anniversary of Neon Nights in 2018, re-released a Deluxe Edition of the album on vinyl and CD.