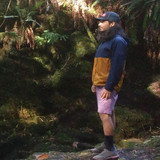 Brian Africa is an eclectic singer/songwriter/multi-instrumentalist from Vancouver, BC, Canada who is taking the DIY solo approach to creating and releasing music. His music leans towards Indie Folk with a hint of Nineties Alternative Rock and Sixties Folk Music sensibilities. His latest EP release, "Emotions (2013)", is a collection of demo songs from 2013 that Brian had the intention of reworking down the road. Instead, he has decided to release the songs as they were originally produced, to capture that time in his musical journey. Follow Brian on Instagram and Facebook for more from this up-and-coming Canadian indie artist! **visit BrianAfricaMusic.com for a FREE song download**