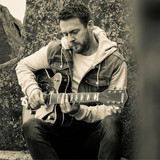 Gareth Lewis is a UK Americana artist from Swansea, Wales. He has a long career in the music industry as a songwriter, musician and singer. Americana music is the perfect fit, as it combines Gareth’s influences of blues, country, rock, acoustic and gospel music. Gareth has a successful track record as a songwriter. His song ‘Don’t Let Your Love Lay Down’ made it to the final and the top 2% in the Americana category at the International Songwriting Competition (ISC) in Nashville.

In 2021, a song he co-wrote called ‘Something New’ with songwriting team Delta Kills was used in an online advert by Porsche featuring Bill and Ted stars Keanu Reeves and Alex Winter. Gareth is now focusing on his music as a solo artist. He has released four tracks and his latest two singles ‘If I Don’t Make It Home’ and ‘All Because Of You’ have both featured on the BBC Radio Wales A-list for four weeks. Influenced by many genres, Gareth's voice as a writer is about the human condition and looking for a connection with people through his songs. His latest works are themed around overcoming fear and embracing the person you were always meant to be. His new single Vultures is available to stream/download now. Website: garethlewismusic.com Instagram: @garethlewismusic Facebook: @galewismusic Twitter: @galewismusic