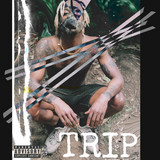 Love IV formerly known as “IV” comes from a family of 4 on both mother and dad side. Born in Newark New Jersey he first discovered he had a voice at the age of 14. Deciding to move to SC with his father. He later on linked up with a crew named “Savages” where he made his first single “Batman & robin” that went crazy in the city he was currently in (Rock hill, sc). From there Love IV seen the potential he had and followed his dream. With patience and hard work he created a new sound he called “trap metal”.

As love IV would say , “TRIP ALONG” with him as he tell stories