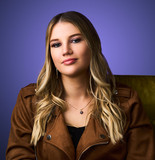 “Sarah Harralson presents honest, bare-boned recordings that are authentic,” stated Music Connection Magazine after hearing her debut singer-songwriter EP, Finally Found, in 2014. Her authenticity lies in her lyrics based on true stories followed by melodies that will be stuck in your head hours after hearing it. This Knoxville native began writing songs when she was ten years old, her granddad being her biggest musical influence. A year after releasing her EP in 2014, she was discovered by Scotty Schultz, drummer of Shooter Jennings. Scotty opened up his publishing company, Raindrop Music LLC, in 2015 and after hearing Sarah’s original song “Watered Down Whiskey”, he knew he wanted to sign her right away. Scotty decided he would produce her first country EP, Watered Down Whiskey, of all original songs that Sarah has either written or co-written. Sarah’s country influences range from The Dixie Chicks to Jewel to Johnny Cash, which comes across on her second EP. One of the tracks on the EP includes, “Radio Static” that was co-written with Johnny Garcia (lead guitar for Garth Brooks). Over time, Sarah began writing and working with Johnny, which evolved to Sarah signing her next deal with Busy at Play Publishing. Besides performing, Sarah also produces music herself and decided to release a collaborative album, West of Me, with co-writer Christine Bauer in early 2019 that she self-produced. Her new single, "The America I Knew", is out now.