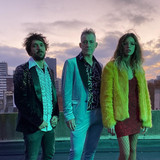 Indie-rock / new wave band based in Barcelona, Spain. Formed by Duncan Foord, Scarlett (Side Chick) and Josep Vilagut (Summer76) The Lucies renewed formation presents their new single "Sapphire" which will be included in their second studio album that will be released in 2020. The successor of «Red And Black» (2016) has been produced at La Masía Music Lab Studios in Barcelona by Josep Vilagut (bass & guitars) and Scarlett (synths, piano and guitars) and the stellar collaboration of Aleix Bou (drums).