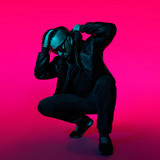 Meet Seattle's own dystopian pop artist US3R. He is best known for his knack for weaving subversive, dystopian lyrical themes into deceptively fun electronic pop music. Described as a combination of Justice, Daft Punk, The Weeknd, Billie Eilish, and Disclosure, his music feels familiar yet pushes boundaries. His debut album 1985 firmly planted a flag in the ground, showing what he was all about. As a child of a musical family, the record was a wild infusion of campy synth funk, modern electronica, dafty vocoder exploration, and 90s R&B. Riding off the momentum of his first album, US3R’s second album “INFLUENCE” was a pure contract to his first work. if 1985 was an electronic utopia, then "Influence" was the “Black Mirror” of his repertoire. The other-worldly, grungy concept album explores social commentary about modern love, acceptance, and belonging in the era of social media, where people's worth is measured by likes and followers. In early 2020, the INFLUENCE Tour saw US3R playing shows across North America, before the global pandemic forcefully shut down the live music industry. Ever since, musical innovator US3R has leveraged his background in tech and AI to explore a new frontier of AI-generated music, giving "hacker pop" a whole new meaning. As US3R sat in quarantine, he embarked on a journey to write his ambitious third album "Dreams and Nightmares," a 19-track OPUS that takes us on a journey through joy, despair, and ethereal healing of 2020.