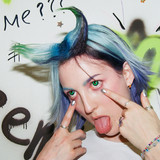 Montreal artist, singer and producer Sophia Bel has always been slightly out of lockstep with her surroundings. Born in the United States and raised in Quebec City in the era of Britney and Christina, from a young age Bel was intrigued by the links between clean pop songcraft and the brooding, intriguing sounds of trip-hop and drum ‘n’ bass that she was also exposed to at the time. Her black fingernail polish made her the target of bullies at her school in suburban Quebec City, earning her the nicknames “Emo” and “Princess of the Dead.” As an artist, She’s reclaiming those hurtful names and owning them: her debut EP’s, entitled Princess of the Dead, Vol. I and Vol. II, delve into her past experiences with wit, authenticity and refreshing candour.