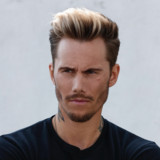 Growing up in a musical family that exposed him to such divergent influences as Queen, Daft Punk and Earth, Wind & Fire. KAAZE began playing piano and drums at age of 4, while developing an ear that would eventually make him an established artist in his own right. KAAZE heard his first house track at age of 16 and quickly rushed out to buy his first DJ rig shortly thereafter. He played his first gig one year later, being so young, his mother had to chaperone him to the show. KAAZE’s steadfast studio ethic and ear for melodic elegance helped emerge a specific bootleg that caught the attention of Hardwell which changed everything for him in the span of a season. KAAZE made his solo debut on Revealed Recordings with the release of “Tell Me,” a track that reached Top 2 on Beatport. In 2017 KAAZE got a huge start with songs like “Triplet”, that was named the “The Miami ID of the year”, to his high-profile collaboration with Hardwell, “We Are Legends” which has led KAAZE to the brink of a breakout year! In 2019 KAAZE took his career to the next level by releasing his debut album “DREAMCHILD” that was dedicated to KAAZE’s childhood roots of rock n roll mixed with todays modern EDM music. The album gained over 30 million streams within the first year. It’s easy to say that KAAZE has one of the most distinct signature sounds in the scene and it has generated collaborations with big names like Tiësto, Hardwell and KSHMR.