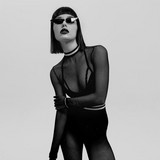 Mari Ferrari sets personify her unwavering passion for electronic music. Starting her career back in 2007, Mari’s touring schedule has taken her to many of the world’s premier clubs and festivals, demonstrating her global reach as an artist at the peak of her powers. Mari’s personal goal has always been to bring a “stylish prowess to the dancefloor through music”, a mantra she lives and breathes each day and which had led Mari Ferrari to capturing the minds and bodies of likeminded music fans the world over. Her performances have led to appearances at events such as Sensation White, Hed Kandi and the Official Formula One After Party in Dubai. Mari’s music has also reached fashion shows for the likes of Ed Hardy, Christian Audigier and Fashion TV. Combined these international travels have seen her touch down in over 50 countries worldwide performing everywhere from America and Europe to Asia and the Middle East. Her single ‘Hello Hello’ is an emotive vocal song that touches the heart strings thanks to. Singed to the renowned Dutch label Spinnin’ Records, ‘Hello Hello’ is a promising single that, equipped with its boundless outer space music video, has all the potential to put Mari’s music into its own stratospheric dimension!