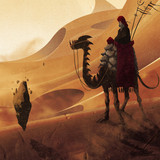 King Bong was born in the year of VIII, the breed of one night of wild intercourse between the Universal Evil and the very principle of Life. The Beast has claimed the intergalactic throne as its own and has immediately set course on a path towards immortality. The three acolytes of the King have constantly been refining their sound, based on live playing and improvising. The chaotic breed of influences, spanning from oppressive riffs to over-the-top funky vibes, from noise aggressions to placid seas of synthesizers is able to bring the listener through an adventurous musical trip. As years go by, new influences come into play and King Bong’s aural exploration goes deeper and deeper. In 10 years King Bong have published a streak of mostly live recordings exploring venues and ideas and finding their own voice. 2018 is the beginning of a new adventure: “Beekse Bergen”, an ongoing series of live improvised albums where the three follow the map of a mythical land. Every evening a new route on the map is choosen and described with new music by the fearless armies of the King.