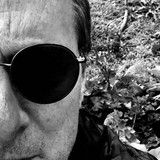 With his world-weary yet clear, optimistic voice and his rootsy, bluesy, and utterly natural musical arrangements, Bruce C. Stevenson is an artist who appeals at once to the mind and the heart. His first solo project, “Thanking Jupiter: The Return of Jet Swindle,” is a passionate love letter to his two daughters, the environment, and music itself. Spinning off the full recording is THE EP, which is being released now. A veteran of the Bay Area band The Alien Cowboys, Bruce has succeeded, with “Thanking Jupiter,” in creating a gift for everyone who loves strong tunes. With songs like Randy California’s “Nature’s Way,” Neil Young’s “Old Man,” and his own “Always Know Love,” Bruce blends his personal, intimate vocal stylings with music and lyrics that kindle a certain bittersweet optimism in the listener, both speaking to the current state of the world and offering a potential vision of the future. Grammy-Award winning producer and engineer Bill Drescher has greatly helped shape “Thanking Jupiter” into an album that, while retaining a more commercial drive and appeal, loses none of Bruce’s unique touch.