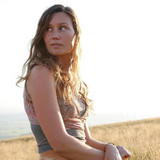 Katy Hooper is a travelling singer songwriter born in Australia but with roots in many places between the countries she has lived and travelled. Self taught, Katy uses delicate vocals and finger picking guitar to create her own unique Folk/Americana/World style influenced by her transient life. Her songs speak of connection to the natural world, a nomadic spirit and personal encounters within the different cultures and countries through which she’s travelled. Katy has performed UK folk festivals and music venues in Latin America, Europe and Scandinavia and her discography comprises of three independently produced records. At the age of 18 Katy took her guitar and hitchhiked alone from Guatemala up the west coast of America to Alaska before recording her first EP ‘Freedom From The Known´ in Brixton, London (2006).

Her second EP ‘Pelican’, recorded in Bristol, UK 2015, explores themes of love and ‘captures the sense of transience of life on the road´, Folk Radio UK, 2015. Her latest album ‘Handmade Journey’ recorded in The Canary Islands, Spain, 2020, is her most personal to date and based upon three years living on these Atlantic Islands and travelling through Latin America. Katy also expresses herself and her experiences visually through fine artwork, which she often uses to compliment her songs and albums covers.