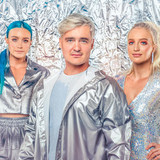 Sheppard are an award-winning Australian pop band from Brisbane, Australia. After emerging onto the Australian music scene in 2009, the group released their debut EP in 2012, featuring the standout single 'Let Me Down Easy' (3 x Platinum sales in Australia).

Sheppard's breakthrough international hit single, 'Geronimo', was released in Australia in March 2014, and it has since sold over 2 million copies in the US. The track, taken from Sheppard's 2014 debut album 'Bombs Away' was the most played song on Australian radio and the highest selling single of 2014 by an Australian artist. The debut album won George, Amy and Emma Sheppard an ARIA for ‘Best Group’ and launched Sheppard onto festival stages worldwide. Sheppard returned with sophomore album Watching the Sky in 2018 which debuted at #1 on Australia’s ARIA chart and scored Top 10 debuts worldwide. Lead single Coming Home achieved #1 and 2x platinum status in Australia, #1 in the Netherlands and Top 40 in Belgium. Globally it has generated over 328 million streams on Spotify and was #1 on the AIR Indie Music 55 weeks after release. Now is 2020, Australian pop sensations Sheppard are preparing to enter a long-term relationship, with the announcement of a brand new song every month. Their innovative release strategy is a year-long project, that will cultiamate at the end of the year with the release of their third album.