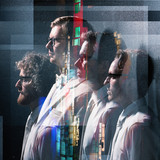 Public Service Broadcasting have been “teaching the lessons of the past through the music of the future” for more than a decade now. 2013’s debut album Inform - Educate - Entertain used archival samples from the British Film Institute as audio-portals to the Battle Of Britain, the summit of Everest and beyond. Two years later, The Race For Space used similar methods to laud the superpowers’ rivalry and heroism in orbit and on the Moon. In 2017, joined by voices including Manic Street Preachers’ James Dean Bradfield, Every Valley was a moving exploration of community and memory via the rise and fall of the British coal industry. Pointedly topical in its analyses, it reached number four on the UK charts. “Doing this felt inevitable, somehow,” muses J. Willgoose, Esq. “In my head, it was whirring and pulsing away for a long time, even before Every Valley - this fascinating, contrary, seductive place. I knew the album was going to be about the city, and its history and myths, and I was going to move there. So it’s quite a personal story. It’s become an album about moving to Berlin to write an album about people who move to Berlin to write an album…” Though PSB’s use of electronics and surging guitar rock remain familiar, Bright Magic uses samples, and the English language, sparingly. It differs from their previous albums in other ways: less linear and narrative, instead it’s an impressionistic portrait of a city from the ground up.