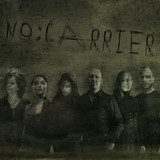 no:carrier is a German-American Electropop band that was founded in 1995 by singer/keyboardist/producer Chris Wirsig and singer Stefan Ritter under the name Fast Delay, but soon renamed to no:carrier. In 2001 Cynthia Wechselberger replaced Stefan Ritter as singer and their style changed from EBM and harsh Electro to a more Dark Wave and Synthpop influenced music. After two cassette tapes in the 1990’s, no:carrier have released four studio albums and several EPs and Singles to date, their music embracing different styles like Trip Hop, Electropop and Alternative.