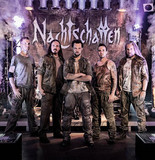 Nachtschatten from Karlsruhe/Germany have been delivering Melodic Death Metal since 2010, always with a neck workout guarantee. Elaborate melodies, intertwined guitars and full speed parts complete their sound. During the last few years, Nachtschatten presented themselves successfully to audiences in Germany and other european countries, managing each time to reinvent and captivate through their energy and live dynamics. The payoff: an album release in 2015, and a host of shows to promote current and new songs. A full broadside of their creativity can be experienced with their debut album, „Prolog“, which was released worldwide in February 2015 by SONIC REVOLUTION. Produced at legendary Little Creek Studios in Switzerland (Destruction, gurD, ProPain, Panzer), the album captures their energy in 12 powerful songs. On 6th of march 2020 they will release their 6-track EP „Leuchtfeuer“ worldwide!