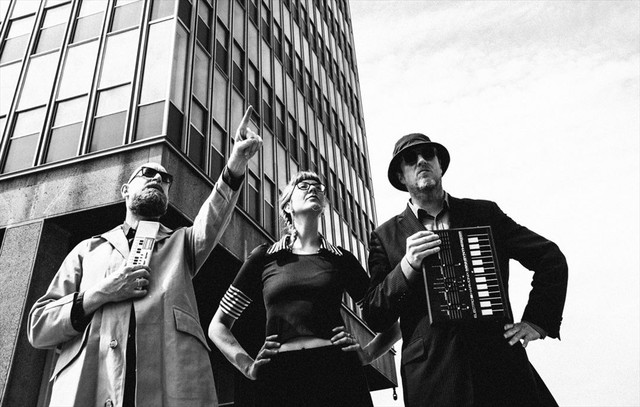 With a sound that balances icy electronics and precise robo-disco against vocals that shift from detached to warmly emotive, the International Teachers of Pop show on their self-titled 2019 debut album and 2020's Pop Gossip that they fit into a tradition stretching back to Giorgio Moroder and the Human League, Moloko, and Pulp, and on to LCD Soundsystem. The trio formed when two of the guiding lights of electro-punk weirdos the Moonlandingz -- Adrian Flanagan (who is also part of Eccentronic Research Council) and Dean Honer (who was in the '90s electronic group All Seeing I) -- ran into Soundcarriers and Whyte Horses' vocalist Leonore Wheatley at a 2018 electronics workshop in Yorkshire. Their shared admiration for each other's projects led to talk of writing a song, which they soon did. The track resulted in an invite to do a radio session on Marc Riley's BBC 6 show. They had to write more songs for that, and when Jarvis Cocker asked them to play a concert with him in a Derbyshire cave, they had to write a short set's worth of tunes and worked up a synth-disco cover of Pink Floyd's "Another Brick in the Wall." Róisín Murphy also wanted them for a gig at Somerset House in London, so they had to come up with a few more songs for that. Along with a couple of their inspirations liking their sound, Republic of Music did too. The distributor helped them set up their own label, Desolate Spools, and the trio issued two singles in the summer of 2018, "Age of the Train" and "After Dark." These songs, and the rest of the self-titled 2019 album they were featured on, were recorded in Honer's Sheffield studio using '70s synthesizers, old battered drum machines, and on one song, Moonlandingz drummer Richy Westley. At the same time as that album's release, the group issued a studio version of their cover of "Another Brick in the Wall," sung by Wheatley in German. That track ended up on their 2020 album Pop Gossip alongside nine others that explore various forms of electronic dance music, from disco and electro to synth pop. The record featured appearances from Katie Mason, a childhood friend of Wheatley's who is part of their live lineup, and Sleaford Mods vocalist Jason Williamson. ~ Tim Sendra, Rovi