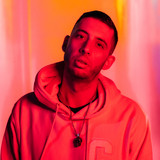 On the brink of releasing his eighth album, Example is beginning a new chapter. Having spent well over a decade in the game, the UK mainstay has crafted a career drenched in accolades: Platinum albums, chart-topping singles, headline festivals slots, and a lengthy stint releasing inescapable anthems that bridge the gap between electronic, rap and pop. Still, Example isn't ready to hang up his boots just yet; rather, he's preparing for the most important release of his career.   The first taste of that album comes via 'Every Single Time', a single that features one of Australia's most acclaimed producers, What So Not. It explores the impact that songs have on people's fondest memories, with Example's vocals gliding over nostalgic production that builds into a glitchy, chopped drop. "Fans always say to me, 'Oh my God, your song reminds me of the first time I lost my virginity, your song reminds me of the time I had my first drink, your song reminds me of the time I kissed my wife.' And that got me thinking about the concept of what songs mean to people," he says. With the benefit of hindsight and a few more years of wisdom, Example discusses what it means to grow older, especially when you've sworn by the Sex, Drugs and Rock & Roll mantra.