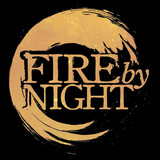 Fire By Night is a Hard Rock band based out of Phoenix, Arizona. The project was initially created by long time friends Chris Cleland (guitar and vocals) and Kailee Vander Maten (lead vocals) in the summer of 2018. The duo’s powerful storytelling is accentuated by mournful, tearing vocals and heavy-hitting guitar riffs. They were recently joined by the young powerhouse drummer, Faith Powell, and together, they seek to make an unstoppable wave in the music industry. Their style is influenced by the likes of Crazy Eighty Eight, Lower than Atlantis, and Biffy Clyro, which can especially be heard in the three singles "The Fall," "Enemy," and "Parasite." The group plans to release three more singles by mid-2022, promising that each one will show their versatility as they pursue the advancement of their eclectic sound.