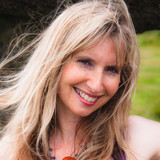 Since moving to Cornwall in 2004, the landscape near my home has been a relentless source of inspiration for my work as a composer. Locations such as the old mine workings at Botallack which appear in my video ‘Elly’s Theme’ through to the unspoiled cove at Porthgwarra, as featured in the video ‘Nancy’s Garden’. My music has been broadcast on the BBC, Classic FM and Sky TV. I love the solitary nature of being in the landscape, feeling the seasons change, and listening to nothing but the sound of the wind and waves, accompanied by the call of the gull. It is here that my creative spirit is ignited.

Violinist Sue Aston graduated from the Birmingham Conservatoire and freelanced with many orchestras as well as doing sessions for rock and folk bands. It was also during this time that Sue appeared on classical recordings, radio and television, both nationally and internationally, and worked with eminent musicians such as Simon Rattle, Nigel Kennedy, Peter Donohoe, Yehudi Menuhin, Sir Charles Groves and Esa Pekka Salonen. Influences Although classically trained, Sue was always a musical rebel, often listening to Punk and Rock music alongside violin concertos. As a young child, Sue would interpret violin virtuoso showpieces, but improvise and change them, creating her own musical soundscapes.