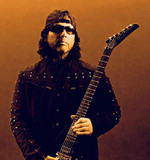 HANK SHERMANN, began playing guitar at age 17 in March 1977. He got into the punk-scene in Copenhagen in Spring 1978, but later found his alley in Heavier bands like Judas Priest, UFO and Black Sabbath. His first band named Brats, was formed in Spring 1978 and first ever show was July 28th that same year. Brats was featured with 3 songs on the Pærepunk Album from Spring 1979. Last line-up of Brats released a full album in 1980 via CBS records, six month later the band broke up.   MERCYFUL FATE was formed in early 1981 in Copenhagen, by vocalist King Diamond and guitarist Hank Shermann. Starting a new breed in heavy metal music. Mercyful Fate disbanded in 1985, only to reform again in 1992. The Band has been inactive since 1999, but will get back together in 2020 playing selected shows in Europe.   Hank has just released his first Single "The Bloody Theme" as a Solo Artist, and is currently working on a full lenght Solo Album.