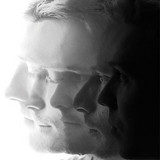 Greater Sirens are a new wave/postpunk-inspired indie rock band from San Francisco. The group was formed in 2007 after Greg Andresen recruited his brother Tim to drum on some home recordings. He'd been experimenting with using a bass guitar like its more versatile six-string counterpart, and from that simple idea, Greater Sirens was born. Deciding they could benefit from a conventional electric bass sound to anchor Greg’s more chordal playing style, the Andresen brothers taught old high school friend and trumpeter, Matt Whitbred, to play bass. Nastaran Amini joined the band on keys, though she left in 2013 and was replaced by Bobby Savre. After an ad at a local music store led to the addition of guitarist Steve Taylor in 2009, the group was set. The band’s debut EP, For the Birds, was recorded at Fantasy Studios in Berkeley and released in 2012. Engineer Jesse Nichols describes Greater Sirens’ sound as, “modern, sharp, indie rock that’s not afraid of the ‘80s.” Greater Sirens released their first full-length album on June 1st, 2018, this time with Greg engineering and producing. Named for the eerie vibe they set out to create, Unnatural Causes is a refreshingly unique approach to an often sterile genre. Incorporating their twin bass guitar sound, unconventional percussion, and more toy keyboards than could fill a toddler’s playroom, there is an experimental edge to the 10-track set that works in tandem with its pop core, making it great for both casual and close listening.