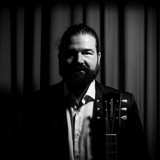 Federico, born in 1982, started playing the guitar when he was 17 as an autodidact. His musical journey starts in the rock music universe with two bands: Rotten Borughs and Logos Recharge. At the age of 25, he meets the world of Jazz music, discovered by listening to Wes Montgomery and Jim Hall. He starts to study jazz guitar at Siena Jazz (where he obtain the three-years degree, with 110 and praise). At the same time, he starts playing with some jazz bands and in 2016 he records his first jazz album with Fring Trio, released by Dry Castle Records Label. In 2016 he also starts to play with Question Market Quartet and records two albums with them; one called ‘Question Market’ (released by Emme Produzioni Musicali) and one ‘Asa Nisi Masa’ (released by Wow Records). With this band, Federico has done concerts all around Italy and also in Istanbul. His first experience as a leader arrived with Federico Carnevali Trio and the album ‘Travel Notes’ published for Wow Records. At present, he plays with Japanese Garden, a modern jazz trio that experiments with sound and musical landscape. With this trio, he records the album ‘Roji’ released by Wow Records in 2019, and he’s preparing the new album. At the moment he continues to play all around Italy, and he teaches jazz guitar in various music schools