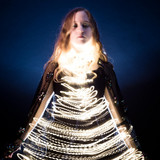 April Fish takes many forms but at its core is composer/pianist/vocalist Katie Morton. The other constant is John Costa, who played Warr Guitar for many years before switching to Double Bass after a hand operation meant he could no longer play the guitar. April Fish formed when Katie saw John busking and left a note in his case. A few months later they opened for Amanda Palmer. April Fish have toured NZ, Australia, the US, and London, with performances ranging from Katie solo to a 12 piece choir. April Fish is a little bit chamber rock, a little bit space opera. They are currently working on a series of recordings to follow their sophomore release, An Alien Invaded the Circus.